My DS sat dormant for a good period in April. I had sent my dogs off to live in a hotel, and finished up Professor Layton awhile back. I had started Final Fantasy Crystal Chronicles: Rings of Fate (whew let’s just call it FFCC:RoF) the same time as Professor Layton, but layed off on it for awhile since it had a multiplayer aspect. But then, it turns out that no one else wanted to play it so I finally went ahead and finished the game. 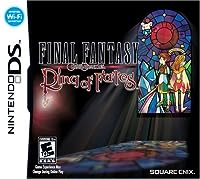 The RPG itself is rather short, I think there were less than 10 dungeons and it only took me about 15 hours. But then I played around with it a little bit more and it turns out that it’s not a bad game, and it’s pretty deep.

Multiplayer isn’t the same as Final Fantasy Crystal Chronicles for GameCube. In FFCC:RoF there’s a single player, AND a multiplayer mode; multiplayer is like single player without the story and well multiple real people, but you can’t play story mode with multiple people. I played multiplayer a bit with Pauline and I guess you could think of it like a limited, but free, but on a small screen World of Warcraft clone.

Single player has a tactic stolen from Chrono Trigger where after you finish the game, you can play the game again from the beginning with your current characters’ levels and items. It takes it a bit further with harder monsters, different drops and items so you can keep playing for better items and a maxed out character.

So I’ve kept playing and going through the game having been caught in the character level/reward structure. But it’s fun, at least, since I can’t find any other better DS games to play.