I suspected that I would be waiting a lot on our trip to Italy so I brought two books, a magazine and my ipod/charger. I only ended up reading one book which was The Wal-Mart Triumph. 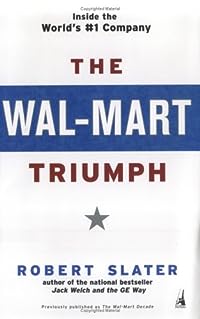 I bought this book a few years ago as around that time I had been reading a lot of articles online about Wal-mart’s efforts against the unions, using illegal aliens as workers, their expansion strategy, crowding out mom & pops and other nefarious tactics they use to maintain their empire. I was hoping for a 200+ page book breaking down these issues and presenting both sides of the argument. I was sorely disappointed.

It started off promising. The paperback was a reprint of the hardcover version, and included a new forward by the author talking about how Wal-Mart has recently had to spend and pay more attention about its public image. But that was about it for all the scandals.

Instead the book focused a bit on the history and life of Sam Walton (interesting) and then his handpicked management team after his death (not so interesting). The author has had a history of profiling CEOs and senior management so I suppose it is not a surprise that he chose to focus on that subject matter.

I learned about how Wal-Mart became the largest company in the world, but not how it is dealing with their present days struggle. I think I could have gained the same knowledge from reading the wikipedia article though, so this wasn’t a good use of my time or money!